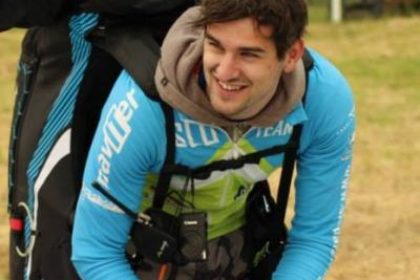 Our roaming reporter/photographer/test pilot/wing tuner Matjaz managed to get Tilen Ceglar to stand still for long enough to ask him a few questions about the wing that he flew in the World Cup in Gemona, Italy last week; here’s what they talked about:

1. Hi Tilen, first you had to decide whether to fly the RFC wing for the PWC Gemona competition. What finally convinced you for this competition?

Well, I was aware of the development Urban and Aljaž did over the past years and seeing the competition prototypes always gave me the feeling they are flying really good. In the end, I decided after I did a couple of test flights with the Gambit, where I immediately saw the potential. Also, I’m more than happy to do my part and contribute to the development of the high-performance gliders.

2. This year’s Gemona PWC spiced up the flying with all the possible variations, from weak flatland flying to strong ridge racing on the last day. In which conditions would you say you as a pilot excel more?

In the past I managed to do some good results in both, however, I enjoy flying in strong conditions way more. For me, it’s more interesting because it is just not worth it to try and control the gaggle. Also, you are able to use the weather in order to be faster and if you hesitate, you can lose quite a bit. In weak conditions, the risk is that you can’t catch up.

3. This was a good test run for the new RFC Gambit, which conditions would you say fitted more for to the wing?

Definitely the Gambit is the most stable glider I ever flew and for this reason, it is just awesome to fly it in strong conditions. But on the other hand, I believe it is a great climber so the controlling of the gaggle in weak conditions is just a bit easier. To me, it feels like it checks the boxes in all kind of conditions.

4. We’ve watched you many times leading the gaggle, which did not end up well sometimes 🙂 Did you find the Gambit faster in order to lead the way so often?

I did find the Gambit just a fraction faster than the rest, but this wasn’t the reason why I keep poking my nose in the front of the field. It’s just that I prefer flying this way, contributing to the speed of the gaggle and not just being in the safe zone and following others.

5. Meduno with North wind can provide some interesting situations in the air. How did the Gambit behave with turbulence in the air?

This was probably the most impressive feature of the Gambit for me. Due to the internal construction, the canopy feels very stable and I quickly found out that flying in the rough air is not an issue. On the last task, I saw I was able to push on the ridge much more than anybody else and had no incident whatsoever. I’m convinced that the approach of 777 is the way to go.

6. The level of the pilot quality in this competition was amazing. How do you feel about your 13th place overall in the end?

In the end, I have to be satisfied with the results. After all, I did make a couple of mistakes. That said, after a few tasks, I was able to trim my mindset and demonstrate the flying I expect from myself on the last task.

Thanks for being on the team Tilen, and congratulations with your fine result from the entire team here at Triple Seven!