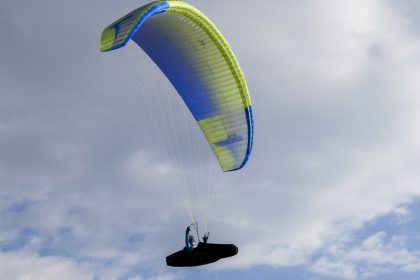 We are happy to announce a first review to a brand new EN/LTF B Rook2 which was made by independent tester Mr. Ziad Bassil. We have had quite some people testing it in testivals and they all had a positive feedback on new wing. Mr. Ziads report is no exception.

Here is what Mr. Ziad has to say about the new wing:

As seen on my videos, my tests are not only to show, talk, or to praise a glider. They are a ‘different’ way to insert the tested ones in the category they are meant for, and also to explain the differences and expectations in words.

I flew the Rook 2 SM (80-100) from 94 to 98 all up in different conditions ,from weak to strong and turbulent in the company of other 2015 high-end B reference gliders and that gave me a complete idea about the Rook 2.

Launching this high EN-B overall is nice and even in +25 km/h wind is quite easy for the category .Just a dab on the brakes to keep it overhead, with a swift airborne mode.

I always alternate several new B gliders in the same day with the same conditions and of course switching gliders with my friends in respecting the loads.

Rewinding a bit…Considering that the Iota 26 moves comfortably as a block with a good, and firm authority on the brakes letting it be efficient enough in turning ability. Looking back also at the Mentor 4 S which has a slight dynamic feel over the Iota but also with relatively similar comfort and a swifter brake response over the Iota and a slightly less thermal climb capability in the weak .Both gliders moves as a block, with no parasite movements. (All in S sizes with same loadings)

Fast-forwarding now …The Rook 2 feels slightly more subtle in turbulent conditions with a very slight insignificant yaw movement before initiating a turn, like the one seen on the Queen, but surely with much more comfort . (More comfortable than a Blacklight, or Chili 3 for example to give you an idea !)

The brakes authority on the Rook 2 SM are more linear than the Iota and the Mentor 4, enabling the pilot under, to feel the air and the movements of the glider placing it exactly where he wants and optimizing the turning radius with a flat turn ( Or a performance oriented turn ) .
The pressure on the brakes are less than the ones on a Mentor 4 S, and slightly close to the Rush 4, which is moderate.

So the Rook 2 SM doesn’t have the agility and the dynamics in turns of the Mentor 4S. It is similar to the Iota 26 agility, “but” with a super efficient climb rate in the weak ,putting it as efficient as the Chili 3 ! ( The Rook 2 SM is a serious contender in climb rate! )

In turbulent conditions and head wind, I found that it’s preferable to load the Rook 2 SM a bit . May be (98 kg) is good for a better into wind efficiency “in racing mode”. Flying it also at 94 is also fine…Just slightly slower to dig in when facing a strong head wind.
The Rook 2 SM trim speed is slightly less (-0.5 km/h) than the Mentor 4S and Iota 26 similarly loaded. And slightly faster at trim than the Rush 4 by +0.5 km/h.

Did some long glides with some good B’s and C’s .

Rewinding a bit again…Doing glides into wind on little Xc’s with the Mentor 4S comparing it to the Delta 2 SM and Elan light 26 showed a better raw glide for the M4 S.
But in tricky conditions with weak choppy thermals, and low saves, both the Delta 2 SM and the Elan 26 always managed to out-climbed me and were well ahead.

Flying the Rook 2 SM with the same Delta 2 SM, and the new Elan light 26, showed a “close” glide performance to the C gliders (in windy conditions) for the Rook 2 SM especially when applying the bar a bit, (@ 45 km/h)
The good part is when each time we happen to get low trying to catch the small thermals bits …the Rook 2 SM was the first one out of the hole! and gliding away…

It was clear, when using the first part of the speed bar,
that a quick difference is felt and seen in turbulent glides.

The action on the first bar did in fact smoothed the glider movements ! and i believe that the glide angle has improved over the trim speed glide ! That’s impressive !

Big ears are stable with a -3m/s with bar. They reopen quickly on release.
Wing overs and 360’s are also fun to use .
The speed over trim at 98 all up is + 14 km/h with the pulleys overlapping (Taken at 800 ASL)
The speed bar pressure is moderate on my Woody Valley X-rated 6.

Conclusion:
Triple Seven gliders seems to inherit the know-how and fine tuning capabilities of the Valic brothers competition background, by producing fine gliders with optimum line width and layout, and a big attention to the glide at speed !

What i have felt and seen, is a well designed, high-end B glider “with character”, up-to-date performance and a well tuned brake fan for maximizing the turning radius.

The Rook 2 isn’t a boring stiff B glider nor a lively one for sure !
The pitch movements are nearly absent. And the roll is moderate for the B class.
The tips are solid and powerful. They move sideways a bit, with the center pitch still very stable in movements.
They give a certain fragrance to the flight, which sensitive pilots might appreciate over a stiffer one.

The Rook 2 with it’s efficient climb rate, enabling low saves, and an impressive glide around ± 45 km/h will share the top places in the best efficient ones.

Another confirmation on well finished product like Rook2 definitelly is. Test yours at your local dealer.