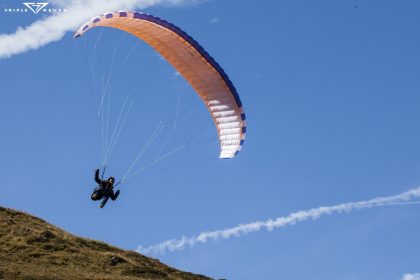 We are always happy with the general feedback from pilots around the globe that get to fly our wings. Yassen Savov is a well known name in paragliding circus, he was European champion in 2012 and he can count many more great results in his career. He was in search of a hike&fly machine that will satisfy his needs and it looks like he found his match in our P-light 17. Here is what he wrote to PG forum:

After the comp here in Réunion Island, this morning we went for a nice hike-and-fly session in the Jurassic Park backcountry terrain of Reunion Island. So I had the chance to test my new toy – P-Light 17. I made a descent of about 1500m, including about 10min of thermaling and some small wingovers at the end. Also, there were places with quite high turbulence. So overall quite good testing conditions.

To set the background, I should say that for more than a year now I’ve been looking for a wing not heavier than this (2.6kg), yet with good enough performance, speed, and penetration, and also solid enough to fly without a rescue and back protection. Until now I had not found any manufacturer offering such a wing on the market.

Shark nose for more stability, three-liner and few lines for good performance, super stable (but note that with all that energy it moves quite a lot, in turbulence making some sharp pitching movements forward, and so I think it requires a decent level and amount of active piloting), super playful and direct handling, and, at only 2.6kg, super versatile!! It also has normal webbing skinny risers, not dyneema skinny ones, so that’s quite user-friendly on the takeoff.

Very importantly, it has trimmers. In neutral position I guess speed is somewhere around 45km/h. From that position you can pull for thermaling (seem to work quite well) or release on glide for even higher speed and penetration, or maybe for skiing too. The trimmer travel is not extreme, but enough for me. If you want to push more speed, better use the speed system – but I have not tested that much, so can’t comment on it yet.

I could actually compare the glide during a smooth top-to-bottom back home in Bulgaria – to a friend’s Gradient ENB wing, I think Golden or something like that, some model from maybe 5 years ago, I guess. So compared to that quite typical ENB glider, after about a 5km glide I lost about 100-150m to him, while my speed was about 5-6km/h higher. So not bad at all for such a small and light wing.

After the flight today I was ecstatic, shouting with joy, because I knew that I had found my long-expected baby! Oh, yes, I have!! And soon the snow is coming, so looking forward to mix it up with skiing and also ski-touring! All the possibilities!!Smile)

Even with very little experience on it, maybe you can see how excited I am about it! hehe! I hope Valic brothers sell a lot of it; they deserve it, after making my dream a reality!Smile Good job, brothers!! I’m impressed.

p.s. I was flying about 88kg total, and I’m really glad I chose the size 17 – because 17 or 19 was quite a dilemma for me. Thermaling on this size is not as bad as I thought it would be – it’s even quite pleasant, playful, and even effective – good surprise! Oh, and the turning radius with such a small wing is quite funny – you turn tight as a ballerina.

p.s.2 One slightly annoying detail for me at least was the high number of pieces of fabric they used for making the canopy. I would have preferred less pieces and details in the colour design – that would mean less stitching, less work to make it, so a little lower manufacturing price, therefore maybe a little lower consumer price. Maybe even the weight would drop by 50g or something. Anyway, this is not important at all, just a small suggestion for slight refinement, I guess.

Looking forward for more and more time with my little baby! Cheers!