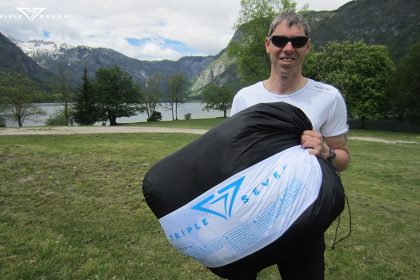 Triglav is the highest mountain in the Julian Alps standing at 2,864 metres. The flight was done using a 4-stroke PPG (paramotor) that he borrowed and a large Pawn fitted with the optional PPG risers. In total there were 6 pilots that attempted the climb, the others being clients for his guiding business, xTc Paragliding.

Due to the excessive altitudes, only the Pawn was able to make the full climb, the other pilots having opted for Reflex type wings with their higher sink rates. They launched at a site near Bohinj Lake and spent one hour climbing, slowly approaching the peaks of the high mountains. Towards the end of the climb Brett approached Triglav approximately 150m above the peak and against a slight headwind. The snow covered top showed the footprints of two brave souls that have recently walked up there, although they were not there now.

Tracking in from the south, and in sinking air, he crossed the spine and took gentle lift on the north face before making a few turns directly over the peak. Having achieved the objective he went on a 10km glide to land at the waters edge of Bohinj lake, a jewel in the National Park of Slovenia. 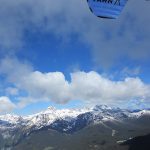 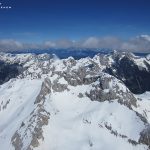