New podium for the King and Johannes 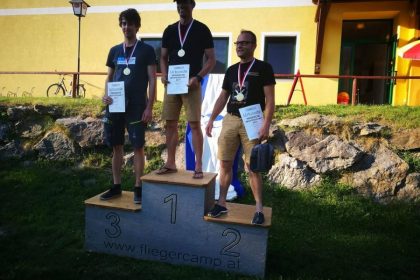 New rising star and Triple Seven team pilot, Johannes Baumgarten has been to traditional Hessische Meisterschaften competition in Greifenburg. With one of the best weekend where long flights have been made in the Alps, Greifenburg area provided strong conditions where pilots had to fly on bar most of the time. Johannes used the three liner Kind to its full potential landing at 3rd place overall in the end, after three really challenging tasks. Big congrats from the team on this great achievement.

We asked Johannes for some words about the competition:

This year’s Hessenmeisterschaft was the first competition where I faced really good and experienced competitors while having a competitive wing in my hands. So I was not quite sure what outcome to expect. The weather was perfect and our first task was a 71km race to the goal. I had a good start and kept up with the leaders right from the beginning. During the task, the good climbing capabilities of the King paid off, and while choosing the best routes in terms of lift I managed to cling to all those “hardcore comp wings” while staying relaxed and focused on the task at hand. This day I came in as 5.

My confidence grew, and on Saturday’s 101km task I pushed even harder. Again, in the stronger thermals and relatively bumpy conditions, the King allowed me to always push a little harder than the others. During the task, the lead changed in my favor quite some times, but sadly I wasn’t able to hold on to it until the end. I was 4th in goal and 4th overall after that day.

Now for the last day, I had to get on the podium. After a small mistake at the beginning, I fought my way back to the top and was back up leading after two-thirds of the race. Sadly a mistake brought me back to second in goal, but only by 8 seconds, which is ok for me, considering the strong opponents.

In the end, I am third overall, which is well above my expectations. Now I only have to train a little more to get a little faster in the future… During all these amazing days the King was a pleasure to fly and clearly showed its advantage while thermalling narrow and strong lifts as well as going through the rough air at full bar in a well-behaved manner.