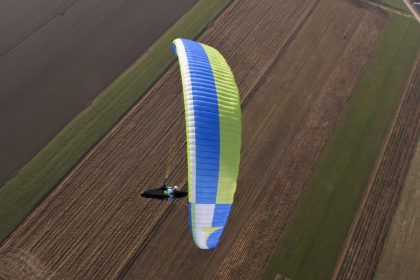 Well know independent tester of the wings, Mr. Ziad got his hands on a brand new King where he was able to conclude his thoughts on the wing in his review. We where confident about the performance of the wing and many pilots who have already been able to test the King, where coming back with great feedback. In that light we where waiting for Ziad to write his feelings of this new game changer in D class. Here is what he had to say about the King:

Triple Seven gliders was founded by two PWC flying brothers, that used to work with several manufacturers and their reputation at the time was the fast flying ability and the competition at the highest level. Triple Seven was born and their first products in the B and C category were the Rook 1 and the amazing Queen which still has the best glide at full speed for a C glider ! Then came the Rook 2 which sits on the top places with the best performers in the B category with a very good accessibility. The gliders made by the Valic brothers, seems to inherit a high performance aim with a relatively comfortable handling each in their respective category.

Now the King EN-D is here…

Flying the King S with the same X-Rated 6 harness i used for all the mentioned gliders, showed me at 93 all up, a moderate to agile glider and could be similar to the Mantra 6 SM agility flown at the same weight also. The brake travel is short to moderate, resembling also the M6 SM brake travel . The differences in thermal entry is that the King S pitches slightly back a little before entering. The King M flown at 108 doesn’t have that pronounced pitch back movement and gives a neutral one instead.

The King could be described as a comfortable D glider when flown in moderate turbulence. Flying the glider is some nasty ‘winter’ turbulent air, the King needs more active piloting than a Mantra 6 MS and slightly less piloting than a Peak 4 21 i was test flying at the same time.
The glider movements in some lee side thermals are sharp with always a marked back pitch on the S rather than a forward pitch. The M size showed me a more neutral pitch.

Of course sometimes it pulls you to the thermals, but in the relatively “moderate” turbulence conditions i flew it in, (only the summer conditions will give a better idea) , i found it easy to control the forward pitch, and in some macaroni stuff, i wished for a more neutral pitch on the S size. The climb rate performance for both the S and the M size in very weak thermals (0.3m/s) is moderate to good resembling the Peak 4 one.

Once the thermals are steady and homogenous the very good maneuverability of the King doesn’t loose any weak thermal, and the flat turning ability, helps immensely to stay in the core. It has much better climb than the Queen in small conditions even loaded.

In those very weak conditions the M6 could still have a slight insignificant edge in float-ability…But i’m being too picky…as you already know.

Doing some glides with the M6, Peak 4, IP 6, showed me for several times a superiority in gliding power for the King S and for sure the M size !
For instance the M6, MS (80-95) at 93 compared to the King M (90-110) flown at 108, gave the King a full + 2 km/h trim speed and for sure an impressive glide angle, like from another dimension ! It looked like chasing a full CCC competition glider ! Flying the King S (75-95) at 93 all up next to a Peak 4 23 (85-105), gave me the same big visual advantage in glide for the King S and as we both used the speed bar, the differences became larger to my favor ! The top speed of the Peak 4 23 is still around +3 km/h more similarly loaded versus the King S size. I found it that especially around 45- 47 km/h the king glide angle is remarkably better ! I was never expecting a clear visual glide difference ! Usually there’s a small glide difference between newly tested gliders.But not this time !

The King does have indeed an amazing glide…or should i say:
The glide angle is worthy of a King !

The IP 6 23, still has also more top speed (+ 6 km/h) , over the King S, followed by the M6 (+ 2 km/h) . I measured the King S top speed at 1000 ASL with 93 all up around 56 km/h with overlapping pulleys. The glide at that speed is very nice, but i felt that the best glide is around ± 46 km/h for the S size which many XC pilots use frequently. I found that racing at that speed through moderate turbulent air is quite usable as i was able to keep my feet on the pedal. Big ears are easy to induce with a stable behavior and efficient descent rate at -3m/s with full bar. They open smoothly !

The King is the new reference in gliding power in the D category .
It seems that Triple Seven has built a powerful, fairly accessible, agile, gliding machine for “experienced” D pilots. Upgrading from the Queen is logical if it was already flown easily for two seasons in strong conditions. I’m sure that any C or D pilot test flying the King, will be shocked by this superb gliding Albatros.