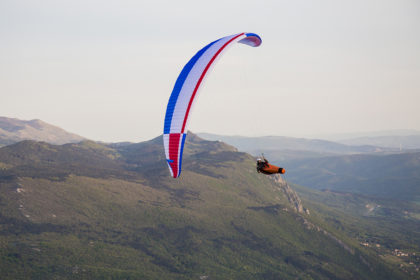 Sepp Schwitzer from paraalpin.info made another honestly positive review of our Q-light lightweight EN/LTF C wing. The review is in the German language, but we’ve made a rough Google translate text for you:

The Queen 2, the already familiar EN-C track wing of Triple Seven, is now also available as a lightweight version. With 4.2 kg, (ML size) according to its own measurement, the Q-light, as the light version is called, is about one kilo lighter than the normal screen. In view of the relatively high cell density of 73 cells, this value can almost be described as sensational. Of course, to get the lightweight, 777 Gliders has made use of super-lightweight materials that have proven themselves in the past, without neglecting the neuralgic points. Both in the upper and lower sail, the Skytex 27 grams universal was used, for the interior, the 27 grams hard finish is used. In the highly stressed front area of ​​the Obersegels Triple Seven opted for the Dominico 30. In addition to the beautiful design, the processing can be described as very high quality.
The straps are made of flat 13mm Dyneema webbing, which is comfortable to handle and very stable.
The Q-light is packed with the latest technology. Miniribs on the leech and brake release system ensures a clean exit edge. C-Wires, which are incorporated nylon rods on the top sail in the area of ​​the C-plane, however, ensure a smooth top sail so less drag. The inner workings of the grand piano are quite elaborate. Not to forget the pronounced shark nose and the improved 3 D shaping at the leading edge for the best possible wrinkle freedom of the top sail.
Triple Seven has explained all the design features on the Q-light website: https://777gliders.com/gliders/q-light/

I flew the Q-light ML, which covers a weight range of 95 to 108 kg. With a takeoff weight of 100 kg, I was slightly below the middle of the allowed starting weight. According to Triple Seven, loading in the upper third is more ideal as the wing reacts even more directly to the pilot’s commands. In the case of size ML that would be about 104 – 108 kg takeoff weight. Harness: Swing Connect Reverse EVO. The time I tested the wing could not be better. From gentle, weak spring thermics to crisp detachments with climbing values ​​of over 8m / s, strong east wind situations, which are known to be quite turbulent, all the way to gentle slides. Of course, the flights were particularly interesting in demanding thermals. The wing surprised me, especially in turbulent conditions. In the barely 6 hours airtime, I did not have a single rattle. The active flying style was of course announced, expecting such a wing but also from his pilot.

Soil handling and take-off: The lines of the Q-light are a bit stubborn and easily twisted. Partly the knots have to be solved by hand. Well, visible are twists in the flat straps and therefore do not cause any problems.
At the start, a light breeze is clearly an advantage. The inlets are extremely narrow slots that can handle a bit of wind to pre-fill the sail. In weak conditions, the cap should be pointed, otherwise it tends to buckle in the middle when mounting. A slight impulse supports the starting process considerably. The cap rises rather slowly into the vertex and has little tendency to overshoot. Only when the wind is strong, the wing must be braked in the zenith.
With a lot of wind, the lightweight cap remains surprisingly good on the ground. Presumably, this is the small narrow entrance openings noticeable, which are not a large windscreen. If the wind comes from the side, the wing breaks out gladly. One can remedy this by tilting the cap, ie laying it exactly in the wind direction, or solving the problem with sufficient wind speed with a Kobrastart. Corrections take the cap well, so with a little practice, the start with the Q-light is not a problem even with not outstanding wind conditions.

Flight: After just a few minutes on the road with the Q-light, I could say for myself: piloting this wing is really fun. With a trim speed of 40 km / h +, the team is quite fast on the road. With the smooth-running speed system are again about 18 km / h inside and you then moves almost to the 60 km / h. Hardly a sports class wing reaches this speed. Especially for pilots with route ambitions a huge advantage, especially since the polar is very flat and the wing hardly increases in sinking. On the other hand, in the thermals, the pilot benefits from the ability to spin and precise handling. These properties allow the wing to be optimally centered in the best way. But the climbing pleasure of the Q-light is also excellent. Although the feedback on the brakes is a bit frugal, the better is the straps. The wing really shows every vertical flow perfectly. The control pressure increases after only a few centimeters train relatively strong. To initiate a change of direction, not much brake application is necessary. A little shift in weight and the Q-light implements these inputs immediately and accurately. In turbulent conditions, the wing is amazingly stable. But you can also support the Q-light well. If the hard cap softens due to excessive turbulence and shows signs of a rattle, the internal pressure is briefly increased by rapid use of the brake. Since the air escapes through the small inlet openings not so fast, a rattle can be prevented by this use.

With the clappers provoked by me, the opening behavior was pretty much everything. From buckling opening over soft opening behavior, but also necessary intervention. Basically, one has to say, the turning tendency is not very pronounced. Stabilization in the collapsed state is also relatively easy for an EN / LTF-C wing. The outer cells generally like to hang and often need to be inflated. Of course, also with the Q-light, especially with large rattling, attention must be paid to the shorter braking distance. For the normally talented LTF-C pilot, these reactions should not be a problem. In a fully accelerated state, I have not tested the folding behavior. After the wing is very fast, I can imagine that the reactions of the pilot must be appropriate.

Descent aids: The Q-light is equipped in each level, ie A, B and C, each with 3 main lines. Thus, the Einklapptiefe when ears create not particularly deep and the maneuver also not very effective. The ears remain folded even after releasing the lines and must be actively opened.
The B-stall is easy to initiate. The flow tears off softly, the wing tilts only a little backward and when opening, the Q-light also takes up speed again. Due to the short straps, the way to pull is not very long, which has a negative effect on the effectiveness of the B-stall.
So there is still the spiral. This works very well. The agile wing can be easily and quickly maneuvered into the spiral. The discharge is also no problem. The Q-light shows no tendency to a stable spiral.

Summary: The Q-light belongs in the sports class undoubtedly one of the absolute top devices. The wing screams for a good and experienced pilot, who can interpret the information correctly and implement it to make the most of the wing. The fine handling and the good climbing and gliding performance invite you to leave the starting mountain to fly large distances. With 4.2 kg and with careful packing comparatively small packing volume, the wing is not only suitable for the railroad route pilots, but especially those who like to get away from the hustle lonely starting places. Experienced pilots or even starters from the high-end EN / LTF-B class, with a flight practice of min. 70-80 flying hours per year should not miss the opportunity to test the wing.

Further information and computer animations with insight into the complicated inner workings of the cap can be found on the Q-light side of Triple Seven.

Many thanks to Triple Seven, who were kind enough to give me the Q-light ML for testing purposes.