D-light and Pele at Dolomitenmann 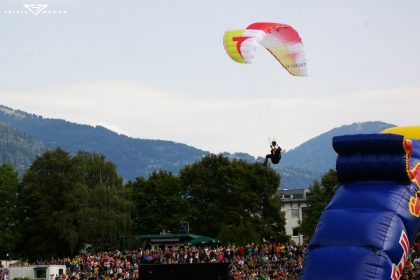 At the recently concluded Dolomitenmann in Lienz/Austria teams of four competed for the trophy in a relay race, where an ultrarunner passes the baton to a paraglider pilot who does two flights with a steep uphill run in between, then there’s a mountain biker and last in the relay sequence is a white-water kayaker who rows the baton to goal.

Triple Seven pilot Pele Fassbender was competing in his 16th Dolomitenmann this year, and chose to fly a “normal” paraglider rather than a miniwing this time around; a Triple Seven D-light. “When it comes to absolute top speed I obviously couldn’t keep up with the Tonkas and similar wings, but the launching is impeccable and the wing is light – something that makes a lot of difference when I’m running up for the 2. Flight.”

In actual fact, poor weather prevented the first flight from being done, so that the pilots “only” got the uphill run and the flight into the Dolomiten-Stadium.

Pele finished 40th out of 110 amateurs, and his team ended up in a handsome 6th place Overall!