Aljaz Valic about the design of the King 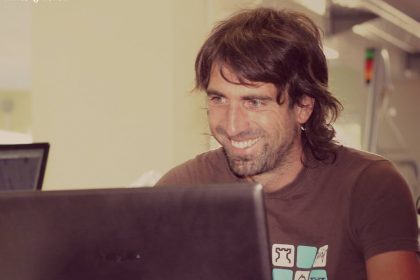 Taken from an interview in Cross Country magazine. Hugh Miller raised few questions about the design that has been used in making of the King. You can read trough what Aljaz had to say about his new wing.

The glider feels taut and stable across the span and chord… there’s very little movement or ‘wriggling’ in the sail. Can you explain how the internal construction of the canopy helps with this good behaviour?

The main secret is in the special skin tensioning, which distributes ballooning according to the stress on the wing at different locations. The internal straps and D-rib technology, and of course the canopy angle and differential twist across the span, all contribute too.

You’ve met your aim of creating a safe, accessible, but still high performing wing. What were the main challenges in achieving this?

Personally, the main challenge was climb-ratio and straight-flight float versus glide-ratio at high speed. We tried many different protos with different line geometries, including radical line length savings. In the end we finished with a quite classic line geometry, which gives the best stability and performance in really unstable air, which are the conditions we really fly.

What style of harness do you recommend pilots fly to make the most of the King?

The King can be flown with every type of harness, but as it likes coordinated turns with hip kicks, we think it’s best to fly it with today’s modern comp pod harnesses. The wing is very neutral in pitch as you glide through turbulence, and also as you thermal, which makes it very relaxing to fly – a characteristic shared by the Rook 2.

Can you tell us your thinking behind designing wings in this way?

If you want to do eight-hour flights in alpine conditions close to rocks and dangerous places and still have a clear mind to think about your next move, you’ll know why you need a balanced wing above you!

My only two criticisms are these, if you’d like to comment? Firstly, on take-off in winds of above 5-10 km/h, the wing ‘stops’ a little before coming fully overhead…

This is a classic pure three-liner problem: it needs constant pull until the zenith, otherwise the trailing edge reflexes up and stops the wing early. Secondly, the brake handles are really soft – with this style of wing, it would be nicer to have harder handles that give more direct feedback.
We decided to use the softer brakes because when you’re making a long floaty glide in calm air with your hands and arms tucked in, the thin handles oscillate less and produce less drag.

Using a Flymaster TAS probe, we measured a top speed around 2km/h faster than any other EN-D three-liner we’ve reviewed – do you agree with this finding?

Yes we agree. We focused on reaching as high speed as possible, and we managed this due to quite soft reactions during the certification manoeuvres.