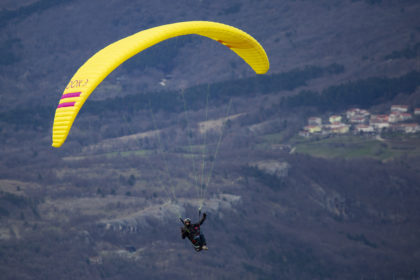 Hello, Aljaz, Urban!
I hope you are all doing well with your family. The world is facing a serious pandemic and I just wanted to give some hope and information to the pilots that are quarantined at home.
Thank you for taking the time to answer my questions.

1- I’m totally convinced that 777 will never release a product if both brothers are not completely satisfied with it! And that leads to superb flying machines. Knight, Rook, Queen, Q-light, King…Every glider has IMHO, a secret ingredient called (efficiency)
What can you say about the Rook 3 in that matter? What would the pilot expect from the new high B glider? concerning performance, climb, speed perhaps?…

Triple Seven: Hi Ziad, and thank you for having us. Indeed, Rook 3 got its final shape in the long run of testing over the past three years. We always want to offer our pilots a wing that will stand for at least three years in the future. Therefore we need to take more time to do things right. The Rook 2 was now on the market for four years being competitive through the whole period of its existence, but, now it is time for a new one. The performance growth curve was exponential with Rook 1 and Rook 2. Still, soon, the overall leaps in performance in the high B class stalled a little bit on the market, especially if you want to offer the wing that still feels right for the high-B class pilots and isn’t pushed into the B from somewhere else.
With Rook 3, we phased our design more on the side of the overall package where performance is not revolutionized, but overall handling with great climbing was taken into the count even further this time. We took the experiences from other models with the line layout, the BC system, the materials, and optimized those into the Rook 3. The PPSL, Aramid mesh of the lines, proved with really extended trim longevity in Queen 2. Therefore it was obvious we will use this mixture also in Rook 3. We redesigned the BC system to a double gearing system, which makes the pull easier. The system is made additional to the existing riser, which is essential from the safety side as you are still flying on the proper risers, and you don’t have the lines attached to the system itself.

2- Ziad: Any performance comparison with the Rook 2?
Triple Seven: Of course, we did quite a few rides next to one another. As mentioned earlier, we’re not doubling or revolutionizing the performance over it, but there is a slight edge in the float-ability of the Rook 3.

3- Ziad: Any light Rook 3 following?
Triple Seven: indeed, since we were able to come up with the wing with minimal count and length of plastics in the canopy (these are only in the leading edge and short), we believe we will be able to offer quite a light wing soon, which will be based on the Rook 3.

4- Ziad: We saw a few pics of the King2 on the web. Is it a 3 liner? Since the 7 aspect ratio King S had that feedback through the brakes with good precision and nice feel in thermals, what can you say about the feel on the King 2? I know it’s still a prototype, but what can you tell more about the King 2?

Triple Seven: With King 2, we hope we are in the last stages of development. The overall package seems to be there, and it will have it in the three-line concept, of course. The wing itself is a completely new wing, the same is only AR 7 compare to the first version. There are 14+more cells, a new profile is more optimized for high-speed stability, S-shaped plastic suspension support in the cell walls is present here as well. There is a new straight plastic material PA 11 for profile support and a new thinner Dyneema dsk99 lines like on the Gambit.

5- Ziad: What can we expect from the King 2? Did the team at least compare it with the latest creations?

Triple Seven: We’re fortunate to have a good group of great pilots here in the area who are flying all kinds of wings—also the latest D class two liners. Let’s say that we feel that we have a good wing in hands.

6- Ziad: Any 2 liner with D certification in the near future?
Triple Seven: Of course. When? We don’t know just yet, maybe 2021… Smile

7- Ziad: When pilots will expect the Bishop? And what did 777 focused on in the development stages?
Triple Seven: The King 2 project left the Bishop wing on the side a little bit. The focus with the Bishop is, of course, ease of use with longevity for the true commercial use of the wing. The tandem market is interesting; some are doing their top to bottom flights, searching for a bulletproof wing, then we have alpine tandem pilots who seek better handling with added performance. We’re trying to add all of this into one good mixture for both worlds.

8- Ziad: Is Triple Seven considering to release harnesses in the future?
Triple Seven: With the team, we have here, we’re all the time fully occupied with the development of the wings. Adding this part to the business would obstruct the quality of the wings design. We don’t want that.

9- Ziad: Anything you would like to add concerning new releases?
Triple Seven: Indeed, the whole world is facing hard times at the moment. We were lucky enough to have the latest prototypes here in the house, so we can test and finish them so when we are back on the hill, we can all enjoy the new wings and freedom again. We wish all the pilots to stay healthy in these times.

Thank you very much for your answers!
Ziad