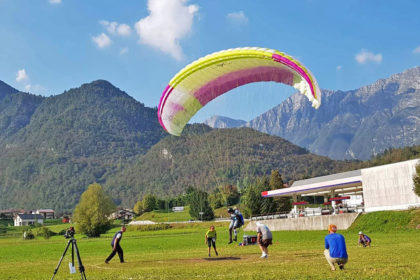 The European Championships were held last week in our ‚hood (almost anyway), up in Kobarid* in the Soca Valley. Our skilled team pilot and friend Jaka Gorenc, currently leading the World Accuracy Ranking, was obviously there, and he came home with a silver medal! Jaka has flown the whole season on D-lights and Deck gliders from Triple Seven, and they seem to suit him just fine!

Very well done Jaka – we’ll take you out for a beer next time you’re in Ajdovscina!

*) Kobarid may sound familiar to Hemingway fans; it is the „Caporeto“ where the young ambulance driver from „A farewell to arms“ experiences the total collapse of the Italian front that sets him off on a stampede across northern Italy, and ultimately makes him abandon his uniform.